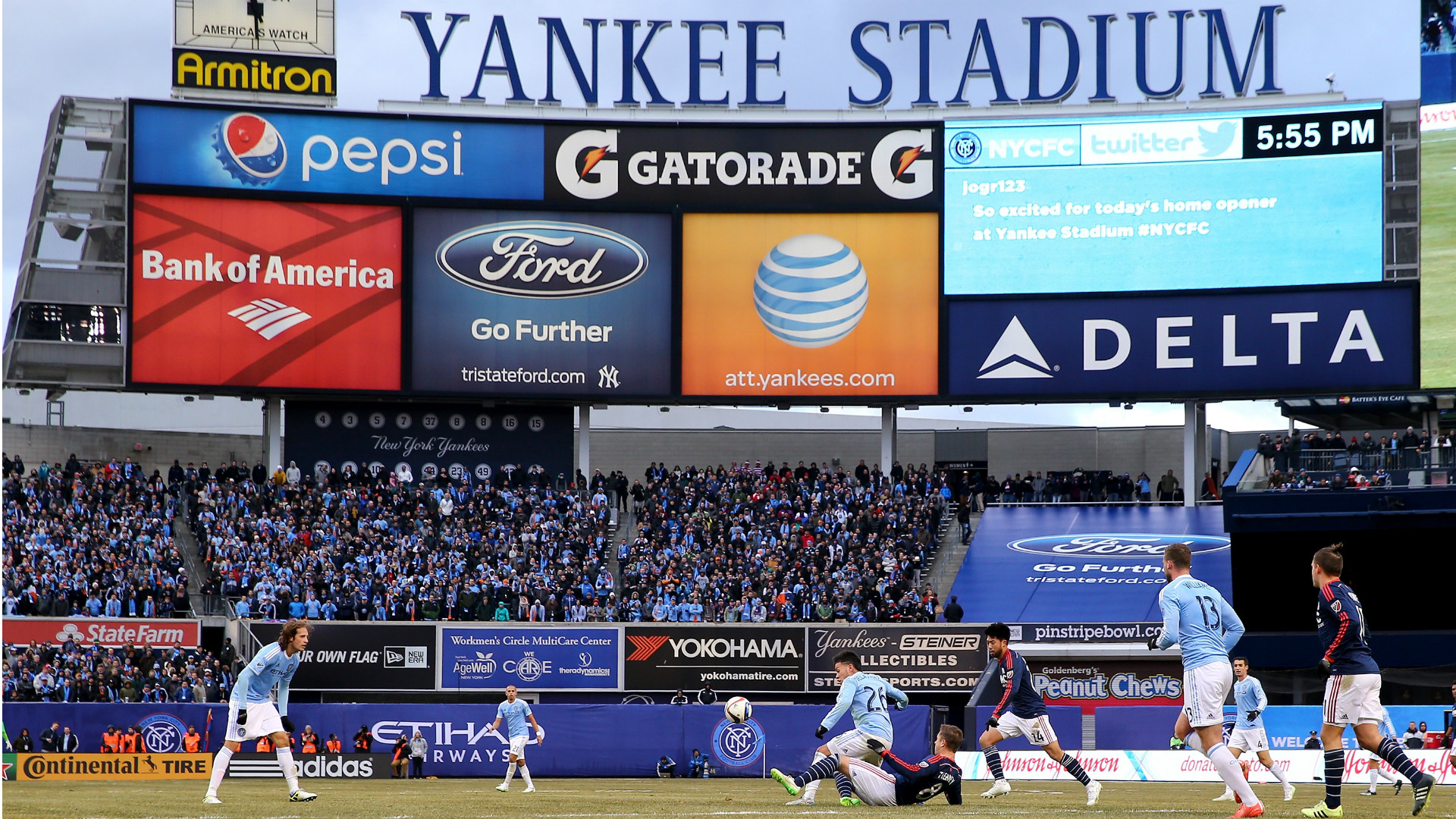 If you've ever played manager mode on FIFA you've know doubt seen the plethora of formation options there are for a club to utilize. And most fans of the game have their formation preferences, which is to be expected. We have preferences for most things in life. And in our beloved NYCFC's inaugural season, we had more than our fair share of formation talk. We spoke (ad nauseam) about the 4-4-2 Diamond formation that Kreis aligned himself with at his coaching peak in RSL. But, due to personnel and other (namely defensive) issues we saw Kreis struggle with finding the best formation to deploy week after week to bring out this team's potential. We saw the 4-4-2 Diamond, we saw limited sightings of a 4-3-3 and for the most of the second half we saw variations of a 4-2-3-1. All of the formations had mixed results, and the team was never able to gather any type of consistent run of play.

Because of this, and no doubt many other reasons, Jason Kreis is out and now Patrick Vieira is in as NYCFC Head Coach. Anything we could say regarding Vieira's approach, tactics, and formation would be very assumptive at best. So this fanpost will not be an exercise in assuming what Vieira will do. This is purely my thoughts on the team and what I think would work best given the personnel currently on staff. So below let's look at my proposed formation and then we'll do a breakdown of why I've chosen the names I have in their respective positions. Now for the formation:

As you can see I went back to the 4-3-3 formation. This formation doesn't represent where I believe some of these players are best used, but rather how I think we can fit all of our best talent into the lineup at the same time. And this lineup is keeping in mind there are questions marks on who's returning (like MCFC loanees Facey and Angelino). So let's get to the heart of why I chose some names that seem odd at the positions they are at.

Many fans probably see this and shaking their heads vehemently in disagreement. And I can understand why. Poku, for all of his natural talent, has at times shown himself lacking in picking up the nuances of the game. But when we look at his midfield partners, who else on the roster is better qualified to bring the athleticism and physicality needed to help out on defense? And while he may not be a tactical genius, he is very strong on the ball, a good ball winner, and willing passer setting up his attacking teammates. I think he could be a great link from the defense to the attack, being able to push the ball forward himself with skill and pace. There is also the idea where Vieira will see Poku as a potential protege and mold him in his playing style. With his combination of strength and athleticism, and being able to take Vieira's tutelage as a mentor, Poku could even excel in this role. And with Pirlo's persistently staying in the middle of the park, there will be ample chances for Poku to join the attack as well, where his strong runs can open up goals for himself and his teammates.

It goes without saying that Iraola did not endear himself to NYCFC fans this summer. Coming onto a team that desperately needed to improve it's back line, Iraola was received well and seen as an answer to our defensive woes (or at the very least an improvement). However, Iraola was not able to solidify the RB position for the team, and after getting injured RJ Allen stepped in and looked the better of the two to finish out the year there. Allen is by no means a lock to start, and if the team can find an upgrade I hope they do, but he showed flashes of promise so I've penciled him in there. Now to the heart of the matter, why do I have Iraola at CB? There are a few reasons. At his age, 33, perhaps the position of fullback is a position he is no longer best suited for. However, he has good size to play centrally, and he is skilled with his feet. More skilled in that regard than most MLS central defenders. And while losing a step on the wing, he'd be faster than most CB options in MLS when it comes to recovering. Strength may be an issue against guys like Kei Kamara and Didier Drogba, but that is the case for most teams in MLS. And I do not believe he would lose in that department anymore so than Chris Wingert and Shay Facey, who did in fact play centrally for the club this past season. He also offers more height and aerial competition for the position than those guys as well.

CB is a pressing need for this team, as we cannot go into next season giving significant minutes there to Chris Wingert and Jason Hernandez again. If you think Hernandez should be considered an option to start again this upcoming season, please read this well written article analyzing his season for NYCFC. I believe Mena can be a strong defender and has already shown flashes of that. He just needs a partner and I think seeing if Iraola can play there will be a good return on the club's investment. It can also lengthen his career a bit as well.

I am someone who firmly believes that Mix is best used in a central role. He does not have one shoe that truly fits, but I think a number 8 role fits him the best. Having said that, he's one of the team's most versatile players, if not the most versatile. And with a midfield already needing to give minutes to Lampard and Pirlo, and needing to find a way to get Poku on the field, putting Mix back in that right winger role made the most sense. But I wouldn't use him as a true winger per se. With Allen, or another attacking fullback, overlapping on the right wing, I think we can see a lot more of Mix cutting in around the penalty box, acting more as a second forward/attacking mid hybrid. This would give Villa more help in the box, and get Mix in more comfortable positions for him. He's also a willing runner and defender, and can help recover on plays when the fullback has pushed further up into the attack.

When you look at this team one thing that becomes quickly apparent is it's lack of pace and athleticism. The team's fastest player is most likely Shelton. A Winger/Forward combo player in college, Shelton typically came through with more assists than goals while in Oregon. And as we saw at times last season, his pace can present a problem for defenses and open up the offense. Getting consistent minutes will be a big boon for Shelton, as injury and early reluctance by Kreis to deploy him led to inconsistent playing time. And putting him on the left side can work well, as Wingert more typically "stays home" and will not push forward often into the attack. This will also mean less defensive responsibility for Shelton as well. On a team with a number of older players, it will be critical to add pace and athleticism in other parts of the field. Players like Poku and Shelton will add a sorely needed element in the XI that was often missing at times last season.

There has been much ink spilled and consternation expressed about the club signing Pirlo after already having signed Lampard to play in the midfield. A younger DP would definitely be a welcomed addition, but that doesn't mean the club cannot succeed with both of these players on the pitch. The key with both players is to limit their defensive responsibilities. More so, Pirlo's defensive responsibility. Lampard showed a willingness to do track back and defend and has been a more physical player in his career. That's why I've put Pirlo in the RCM role. With Mix and Allen also on that side, they should provide him with defensive cover to allow him to do what he does best: play beautiful passes onto our attackers' feet. Initially you may think these slots are not good places for these two as they are referred to at times as "shuttler" roles. But with Pirlo and Lampard this would not be expected of them. They will of course get their fair share of the ball, but they will not be asked to be continuously running up down the field. Instead, Shelton and Mix can feature more heavily as shuttlers. This will allow Lampard to migrate further towards the penalty box to receive the ball. And would also allow Pirlo to sit deeper and pass out of the back. And for both of these players Poku could serve as an outlet to move the ball as well.

While no one thinks of Villa as a true target forward, the fact remains Villa did very well in the role last year for NYCFC. Not only was Villa a willing target man and threatening striker, he was also the focal point of the attack for most of the year, finding his teammates as well creating chances for himself. And with Shelton, Mix, and Lampard pushing forward, he won't be on island by himself. I'm expecting another strong season from Villa this upcoming year.

At this point in the season, there's no one else we can really put to play fullback other than these two. Both were serviceable last year, with Allen showing some nice flashes and work rate joining the attack. Wingert is solid defensively but pretty toothless in attack. Either way, there's a good chance we may see upgrades at these positions before the offseason is over.

With the current roster situation I see McNamara, Mullins, and Jacobson all being the main substitutions with a lineup like this. McNamara and/or Mullins I can see being first sub off the bench, while I'd expect Jacobson will get rotated into the midfield trio to give Lampard and Pirlo breathers whenever games are more bunched together.

Another option or theory I have regarding Jacobson is perhaps seeing if he can play centerback as well. He's a good man marker on set pieces, can fight for balls in the air, and we know he has the grit and strength to play defense. And he's more skilled than your average CB as well. So if Mena and/or Iraola cannot get it done there, perhaps Jacobson could be moved there in an effort to solidify the defense.

So there you have it. Here's one attempt at a formation that I think could work for NYCFC moving forward. I'll try to make a little series of this where I'll present a few more formation options I think would work as well.

How do you think this formation would fare?

FanPosts are not pre-evaluated by the editors of Hudson River Blue, and do not necessarily represent the opinions of its writer community or of SB Nation.