The Hometown 11 head to the mountains for the first non-conference game against the struggling, but overhauled Colorado Rapids.

Share All sharing options for: Scoping the Enemy: Colorado Rapids

After a thrilling, windy and fun home opener and inaugural win, NYC FC heads back on the road for its first game outside the Eastern timezone. Below, we take a look at the season outlook for this week's opponents, the Colorado Rapids.

PLAYOFFS: Did not qualify

U.S. OPEN CUP: After a win over future MLS foe Orlando City, the Rapids fell to the Atlanta Silverbacks 2-1.  The Rapids were riding high into the fifth round game; they trounced Orlando City 5-2. After falling behind 1-0 in the 22nd minute, the Rapids strung together four straight goals, including three by former Rapid Deshorn Brown, who netted his first ever hat trick. 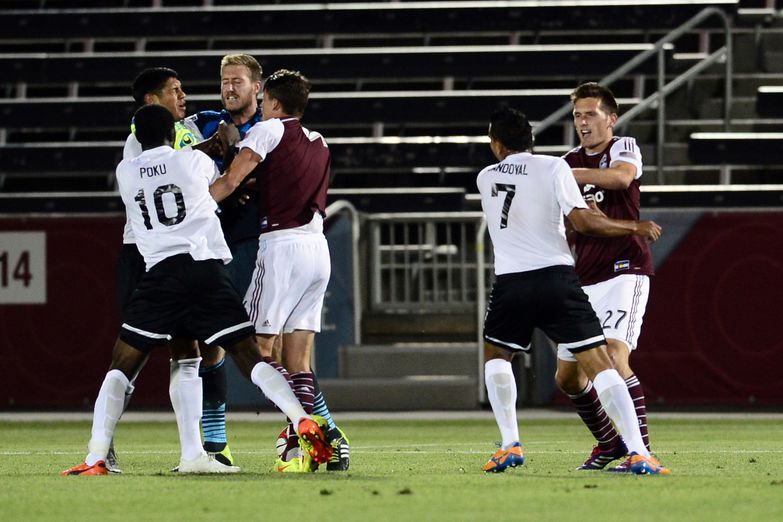 The fifth round match against the Silverbacks was wild, prompting even the MLSSoccer.com writer to describe the match as "insanity." In the 60th minute, a Silverbacks player, Kwadwo Poku, appeared to stop on Drew Moor of the Rapids, which triggered a five-minute brawl. Marc Burch of the Rapids and three Silverbacks players were awarded red cards and sent off.
The nuttiness wasn’t contained to the players either. Atlanta Coach Eric Wynalda argued with a fan and was tossed, as was Pablo Mastroeni, though no word on whether he tussled with fans. Adding even more chaos, the officials halted the game for 55 minutes due to lightning. Despite finishing with eight players, the Silverbacks popped two goals to edge the MLS side by a goal. 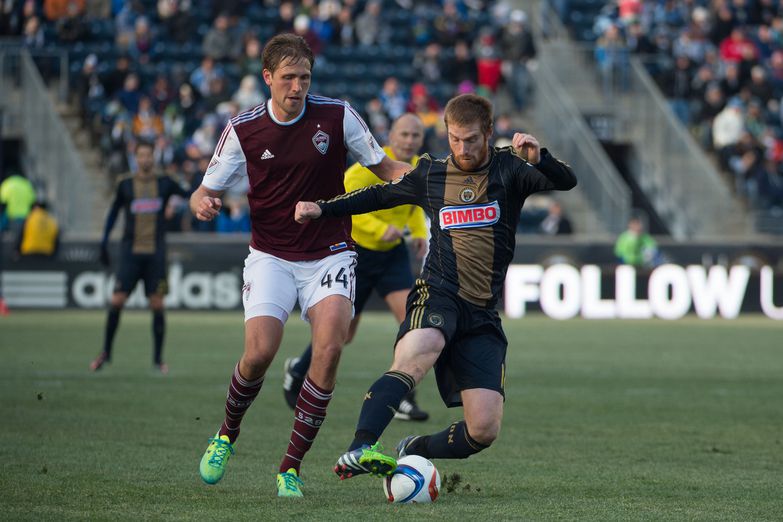 Axel Sjoberg
Sjoberg is worth watching almost for the visuals alone. At 6'7", he's the tallest player in league history and the Sjoberg vs. David Villa matchup on Saturday will be the type of Talls on Smalls battle that great photos are made of. Height aside, he’s worth tracking because he’s a first round MLS SuperDraft pick that’s being asked to anchor the backline. He’s been thrust into the starting lineup thanks to turnover from last year on defense and the promise he showed at Marquette.
The backstory on the Swede is that he began his career at Djurgardens IF, one of the bigger Swedish clubs. After training with the team from age seven to 18, the club did not offer him a pro contract. The only deal he could manage was in the Swedish fourth division, an arrangement that would require him to end his education. He decided the combination of no schooling and relative soccer obscurity wasn't for him, so he found somewhere he could play soccer and study — college in America. He progressed over his four Marquette years to the point where he was a back-to-back All-Big East First Team and became a first round pick.
Juan Ramirez
Like NYC FC's most recent opponent, the Rapids have not been a club that's fully latched on to the Designated Player concept. Juan Ramirez became the club's second-ever DP when he signed with Colorado in the offseason. Unlike some of the flashier DPs like Villa, Steven Gerrard, Thierry Henry, etc., he's not a very well known name. Instead, the Rapids signed him to a DP contract on the expectation that he'll blossom into a player worth such a deal.
Ramirez is an attack-minded midfielder who the Rapids hope will spark the offense from the left side. The team's lacked a player that commands a specific gameplan from the defense. Ramirez missed the season opener with a sore hamstring, but with two weeks extra to rest, he should be ready for his debut against NYC FC.
Clint Irwin
The Rapids goalkeepers had a rough 2014. Clint Irwin started the majority of games, but Mastroeni switched to a goalkeeper by committee approach to close out the season. On the plus side, keeper Joe Nasco set an MLS record. On the down side, that record was for the fastest red card in league history when he was sent off 34 seconds into a Sept. 5 match against the Galaxy in one of the team's low points. So yeah, there's room for improvement in net.
In the offseason, the club acquired Zac MacMath from the Philadelphia Union on loan to challenge Irwin. Both are considered promising, if improving, and both seem to project to be solid keepers in the league. Irwin earned the first start and Man of the Match in the club's season opener against the Philadelphia Union (a 0-0 draw in a game that won't be on many people's highlight reels).
With a young and new back line in front of him, Irwin, likely to get the start, will have his hands full with David Villa, Khiry Shelton and Mix Diskerud. Irwin kept Colorado in the match against Philadelphia with four saves on 16 shots and he'll need a similar performance against the Gotham Blues if the Rapids hope to pull out their first victory since July.

Believe it or not, the Rapids are, like the Revolution in the prior game, one of the founding members of MLS. Like the Revs, they’re an original that’s never really been a signature franchise for the league. Unlike the Revs, they’ve won an MLS Cup (2-1 win over FC Dallas in 2010). 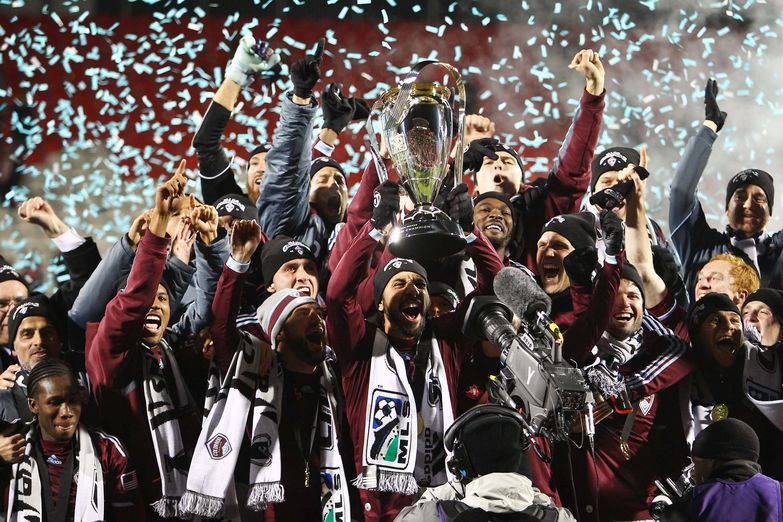 The Rapids are a club that’s struggled with its identity, undergoing three branding changes. But, the current version of the club fits the matured vision of MLS — clean, sleek design, soccer-specific stadium and secure ownership who seems to, now, be willing to spend a bit, if the DP signing is any indication.
After starting the league in the basement in 1996, the Rapids snuck into the 1997 postseason despite a sub-.500 record. Once in the second season, Colorado streaked to the 1997 MLS Cup where they ran into the dominant 90s franchise, D.C. United, and ultimately fell.
Throughout team history, the Rapids have been middling and up-and-down. The best regular season came in 1999, when they posted a 20-12-0 campaign. The problem was that they followed that season by regressing to 13-15-4 and then 5-13-8 in 2000 and 2001.
In 20 seasons, Colorado has only posted a positive goal differential in five seasons and didn’t pull themselves out of the negatives until 2005. The club’s strongest run came from 2010-2013, beginning with the MLS Cup season and continuing with three of four seasons of more than 45 points and positive goal differentials.
In recent history, the club has rollercoastered between years. In 2011, Colorado posted a 12-9-13 campaign, followed by an 11-19-4 disaster, which was backed up with a solid 14-11-9. Despite a club-record 51 points in 2013, the Rapids finished only in fifth in the competitive Western Conference. True to the up-and-down history, the Rapids disappointed fans who thought they were on the upswing with a debacle of a season in 2014, which included a remarkable 0-12-2 stretch.
The leading scorer in club history is Conor Casey, who netted 50 goals over parts of 6 seasons. Most of team’s records are split between Pablo Mastroeni (now the bench boss) and Chris Henderson. Mastroeni, by far, was the team’s most frequent face, playing in 225 games over 10 seasons.

WANT SOMETHING TO MOCK THEM FOR?

The achilles heel for ridicule is the team’s jersey sponsorship situation. The Rapids finally joined the jersey sponsorship trend in 2014, only to be taken for fools by the sponsor. The team inked startup Ciao Telecom to an $8 million deal over five years. It turns out that Ciao couldn’t quite meet the teams and the team ultimately received only about $75,000 of that money in the first year before Ciao defaulted. The Rapids signed a new jersey sponsor this week, Transamerica. No word yet on whether Transamerica is expected to, you know, actually pay.

They’ll "rock" is the bar for "rocking" is set low, like qualifying for the playoffs. The team is generally pegged to finish somewhere between fifth and ninth in the tough Western Conference. To reach the upper limit, they need the new backline to become cohesive and perform well, which will then demonstrate that last year’s goalkeeper’s struggles were an indication of the keepers being hung out to dry, rather than not being very good.
In a best case scenario, Axel Sjoberg contends for Rookie of the Year and pulls together the backline. Lucas Pittinari and Marcelo Sarvas — considered a top flight defensive mid in MLS — combine to dictate the offense through the back of the midfield, servicing newcomer Juan Ramirez, Vincente Sanchez and Gabriel Torres. The absence of Deshorn Brown proves to be addition by subtraction by reducing the amount of whiffs. With Brown out of the picture, there's saddling  balls for Torres and Sanchez, who end up splitting the team lead in goals. 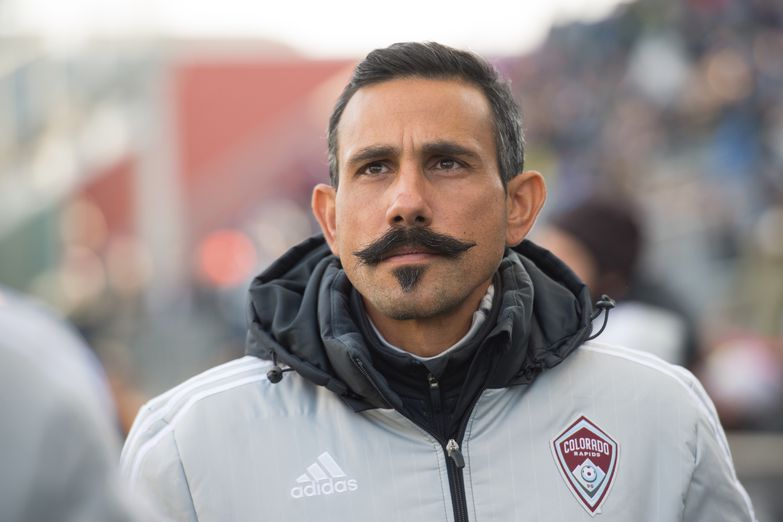 Finally, Pablo Mastroeni proves that his 2014 struggles were a product of being a new coach and figuring his way through the league from the touchline. Success comes in 2015 if he he progresses by eliminating many of the in-game tactical decisions fans questioned him on and sticking to a productive lineup.
On the plus side, the Rapids can’t be much worse than last year. They’re not banking on improvements from the same players, either. The Front Office cleaned house in the offseason; 13 players from the end of 2015 are no longer with the club. Rather than go through the significant personnel losses, let’s be honest and assume that any player shipped out from a team that went 0-12-2 to finish the season is no great loss.
WHY THEY'LL SUCK
They’ll suck because they’re still not very good. Even with an almost brand new roster, the Rapids managed just two shots attempts in the opener against the Union. Sure, the club missed Juan Ramirez, but Ramirez wasn’t signed for an immediate impact. The club is betting that he’ll develop into a DP-caliber player and provide valuel since they locked him up pre market-value spike.
In the worst case scenario, Mastroeni proves that last year’s head scratchers were a feature, not a bug of his coaching and he doesn’t progress. The new backline never coalesces and is overmatched, hanging Irwin out to dry. With no defense ahead of him, Irwin struggles terribly and can’t keep them in every game like he did against Philadelphia.  Ramirez doesn’t develop into a $2 million player and languishes on the wing as a non-threat. The loss of Deshorn Brown ends up hurting the team more than they think and he miraculously improves his 8.3 percent scoring rate in the Tippenligaen.
With increased competition in the West due to Houston and Sporting KC joining Colorado in the conference while punching bag Chivas USA bows out, the Rapids fail to crack double-digit wins and finish bottom two.

If NYC FC wants to truly contend for a playoff spot — and a deep run once in the playoffs — this game is the type that needs to become a routine win. However, the club is still new and this game will be its first road game against an established team — NYCFC goes from a road game against a brand new club to one that’s been in the league since the glorious 90s heyday.
In addition to the Rapids, NYCFC will battle the elements since Colorado plays at elevation. I’m no expert in Spanish or Norwegian topography, but the guess here is that neither Villa nor Mix are accustomed to playing games a mile above sea level (Mix has never played at Estadio Azteca).
Points on the road are always welcome, but NYCFC should shoot for three in this matchup. Let's call it a 3-0 win for the Gotham Blues with goals from Villa, Shelton and Mix.