The Gotham Blues nearly brought home three points. It wasn't a perfect game from the hometown XI, but we at last saw signs of life.

Coming off an all-around stinker and letdown in Utah, the Bronx Blues looked to kick off their easiest stretch of the season. They never looked great, but they never looked outclassed either. Here's our takeaways from a balanced, competitive game (which qualifies as praise for this season):

Villanous: On Saturday, David Villa had his most consistent game since The Win. In addition to the goal, he ripped off four solid shots, including a bender that justbarely flew wide in the first few minutes. At times, Villa looked frustrated and didn’t fight for the ball, but overall, he provided a consistent attacking threat and was more involved than he has been in past matches.

Right Mix: Speaking of the club headliners, an ongoing frustration – one that Raf has been hammering – this season has been Mix Diskerud's up and down performance. Mix has played out of his natural position, or at least has been slotted into a position that didn't best accentuate his skillset. Against Houston in the diamond midfield, Mix was split wide to the right hand side of the diamond in the first half and he was as involved and effective as he's been almost all season. He was more fluid in getting up and down and wasn't running around trying to plug all the holes in the defense.

When Kreis swapped Sebastian Velazquez - who had been manning the top of the diamond - for Khiry Shelton, Mix shift backed to the top of the diamond, but continued to impact the game, and almost nabbed two points for the Blues on a plus cross to Brovsky toward the end. Freed up of the holding role both on the wing and up top, he was more involved in the offense -- though on one occasion, he held the ball when he probably should have fired on net 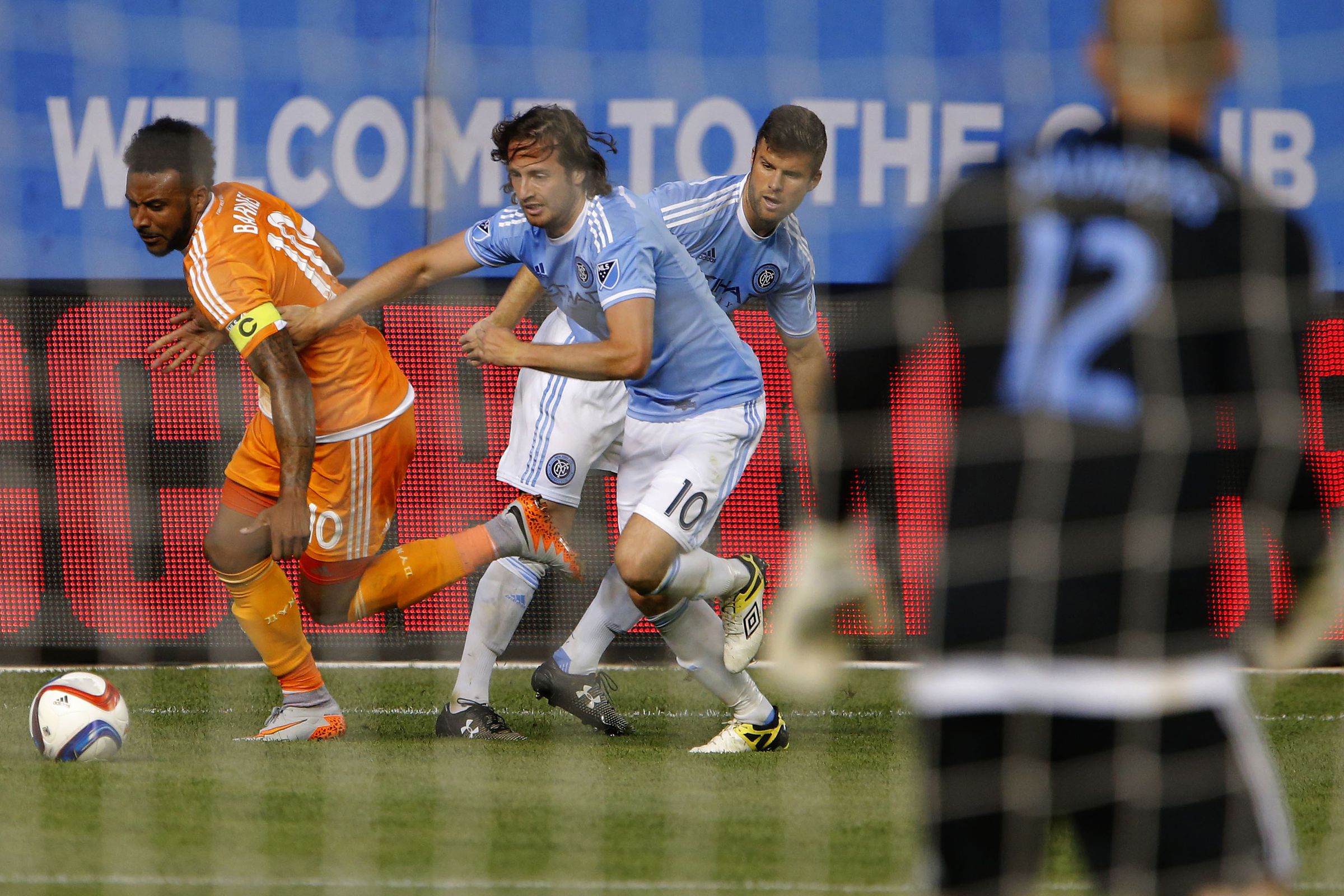 In a game more full of encouraging signs than usual, Mix's involvement in the offense was one of the most anticipated. It's a shame from a club perspective that Jurgen Klinnsman had him on speed dial when drafting the USMNT roster for the next two games. With the national team call-up, he’ll miss the next two winnable matches (more below!).

Run of Play: Throughout the season, we've seen this club alternate stretches of the games that they’ve carried with those in which they were dominated. While this weekend wasn’t a peak performance, it at least stemmed the roller-coaster vibes of previous matches. Possession was evenly split, the Blues scattered chances throughout the game and they were never on their heels for a full length of time. In a season as troubling as this one, a balanced, back-and-forth run of play for a full 90 counts as progress.

Target forward: As Raf noted in his three questions with Dynamo Theory, part of the reason Villa has been limited has been the lack of a true target striker for Villa to play off. Against Houston, Adam Nemec was back in that role. Nemec's a big dude and should win aerials, collect balls sent forward and distribute to Villa. On Saturday, the problem was Nemec didn't have the skill to be more than a target. The midfield continually sent balls his way, but he rarely collected them cleanly and was never in a spot to service Villa. To his credit, though, he was the target for the entry pass that led to the penalty.

Looking at the roster, a solution to this problem doesn't seem apparent until the transfer window. Mullins could be the guy, but he hasn't taken on that role most of the season - though, to be fair, the midfield has been so erratic getting the ball to the forwards that it's tough to judge -- and Shelton seems better out wide, as he was deployed when he entered the game.

Turf Wars: By my unofficial count, NYCFC players lost their footing about five times throughout the game. The stadium and playing surface was always going to throw a wrench into NYCFC’s best laid plans, but Saturday was the first time players lost their legs on the turf. Most of the slips came around the patched over infield, but I caught a few in the outfield as well. Nothing to be done about it, other than a heightened awareness on the players' part.

Missed Opportunity: Taking a step back from the game specifics to look at the bigger picture. The Houston game kicked off a three game stretch of very winnable games. If the club has visions of filling its postseason dance card, the Houston-Philadelphia-Montreal trifecta was the definition of the lowest hanging fruit the league could offer. (One could extend the opportunity a game prior to the Real Salt Lake tilt given that club has the lowest goal differential in the Western Conference, but capitalizing on that kind of road trip is wishful thinking).

Houston, Philadelphia and Montreal have a combined goal differential of -13 (Houston contributes a flat zero). As a result, these three games are the longest string of winnable games the club will encounter all season. To claw back into playoff contention, five points is mandatory and seven is preferable. The Yankee Stadium souvenir beer cup half full? Saturday’s game was a step in the right direction given a cohesive, consistent and at times exciting performance. The souvenir beer cup half empty? The Blues left two points on the table against a team traveling across time zones. Since they haven’t shown much ability to take points on the road, they’re looking at a tough task against the easiest stretch of the year.

What say you? Are we being too optimistic? Did you like the signs of life against Houston? Can the Blues bring back three from Philly next weekend?