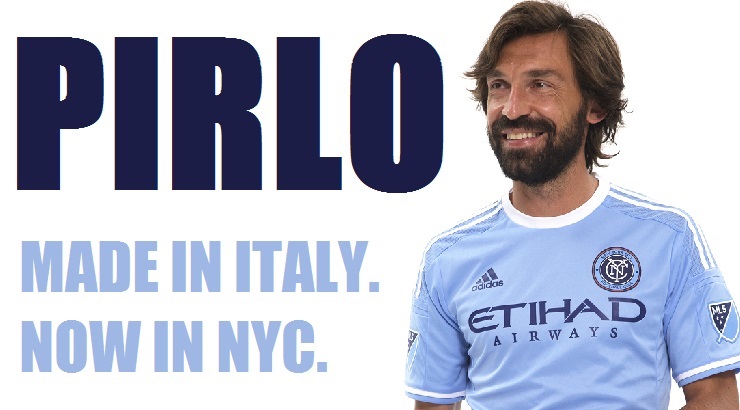 When on the 26th of July, on the 56th minute. he introduced himself on the Yankee Stadium's field, Andrea Pirlo shook hands with his former team mate at AC Milan, Kaka, and settled himself in the core of NYCFC's midfield. On his debut against Orlando, he was involved vividly in the second and third goal as Jason Kreis's team won 5-3 on that day. Undoubtedly, Pirlo's arrival brought a new enthusiasm among the club's environment, a sense of ambition and also a new generation of fans. But how exactly has the Italian's arrival ignited a new fire in New York's recent franchise ?

"We want Pirlo!" "We want Pirlo!". It was the only chorus for entire weeks to celebrate Pirlo's acquisition. Such euphoria in New York for soccer-related events was not common and one has to go back to the original Cosmos days to see this type of euphoria, when the Cosmos purchased Pele.

"It was great because I could tell that they wanted me to play", Pirlo had quoted in the post-match. He made it immediately clearly that he did not embark on this new project for a holiday, but he want to raise the quality of his team. Tactically, Pirlo brought loads of innovative quality in a team which has the goal of becoming one of the elite clubs in Major League Soccer. His chemistry with the likes of Frank Lampard and David Villa is a key feature as the three of them are without doubt the best trio in the league, when it comes to experience and quality. In a league which is still a step behind Europe's best leagues in terms of defensive tactics, Pirlo's characteristic of playing long balls, through balls, quick footwork and speed of direction combined with speed of thought is a fundamental factor which will Patrick Vieira's team talk proor every match week in week out.

But most significantly, what has Pirlo brought is the enthusiasm around the club. The Pirlo-effect was immediate as there was an incredible merchandising boom. Rather than a game-changer for the team, he is a game-changer for the brand. He has boosted in an unpredictable way the ticket sales, with every match being sold out already before matchday. And considering that the Yankee Stadium is usually sold-out for the more attractive Major League Baseball, this can be referred to as a milestone. And when you think that that is enough, New York dedicates the buses to him (together with Villa and Lampard). Thinking about it, Pirlo is the perfect fit for a club based in New York. His beard, his sense of fashion, his geniality, his love of wine. All this has drew lot of criticism from the press, who described this move as a merchandising one and forced by the owners.

As the New York club has returned to the off-season sessions, Pirlo and co. are ready to set the party from square one and reward the blue half of New York a spot in the post-season.

FanPosts are not pre-evaluated by the editors of Hudson River Blue, and do not necessarily represent the opinions of its writer community or of SB Nation.