POLL: 90% Agree That Jesse Marsch Is Better At Whining Than Coaching

The People agree: Jesse Marsch is a good coach... but he's a once-in-a-lifetime complainer.

Share All sharing options for: POLL: 90% Agree That Jesse Marsch Is Better At Whining Than Coaching

The honorable citizens of social media have spoken, and nearly unanimously.

When asked to name Red Bull Coach Jesse Marsch's single greatest talent, Twitter was of the overwhelming opinion that whining is his true calling, with his coaching prowess lagging far, far behind.

Since Jesse Marsch is obviously an accomplished manager, as the over-sized hors d'oeuvres tray he won attests, the whopping 90% margin of the poll only underscores the level of genius and commitment Mr. Marsch applies to the whining arts.

But, if you’re not familiar with his impressive track record, let us count the ways.

Following the crushing 7-0 loss to the Jersey Red Bulls, New York City FC Captain David Villa said "It's not the Red Bulls. With our play today, any team in the world that plays against us [are] winners for sure."

How can anyone possibly complain about this innocuous quote, you ask? Well, only a fool would underestimate the sheer aptitude for whining that Jesse Marsch possesses. As he moaned in response, "I take that as a knock against us and it's something that we will remember."

A better strategy "Whining Jesse" and his Red Bulls could adopt? Clearing all vengeful thoughts from their minds instead, because they ended up retaliating to that perceived slight by losing 2-0 to New York City the next time they met in Yankee Stadium. I think we all "remember" that one.

Speaking of which, NYCFC posted a celebratory team photo following that first-ever win over their New Jersey rivals. Surely, nothing more than a feel-good moment captured on film by New York City for its fans. Totally understandable in the emotional context of the moment, right?

Wait, are you asleep? Have you been paying attention at all? This is "Whining Jesse" Marsch, we’re talking about here. As he told the press following the match:

"Listen man, we are all disappointed. Even when New York City puts the pictures on the internet, it gets everyone riled up."

"Riled up"? Are you going to "remember" that Twitter photo, too? Here it is, just in case you don't: 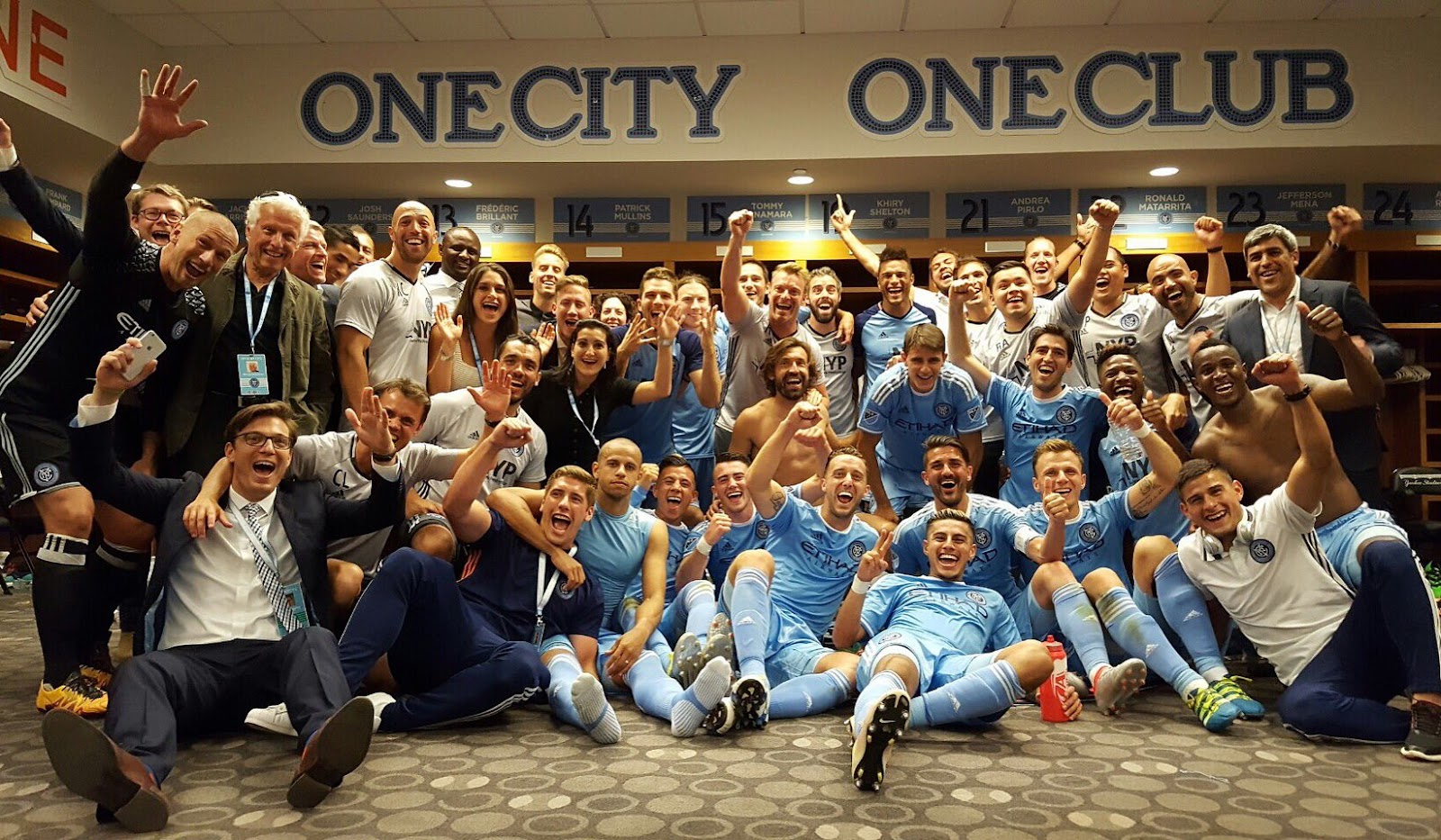 I gotta say, nothing gets New York City shaking in its boots like the threat of Jesse Marsch Whine Time (JMWT). Makes the hair stand up in the back of your neck, I tell ya.

Just this week, of course, Marsch went on a complaining spree against MLS referees, alleging preferential treatment for NYCFC’s Designated Players. Marsch bellyached, "[David Villa’s] a great player, but every game I watch he gets a piece of every defender before the ball comes. He fouls throughout the entire game. He hardly ever gets called for it. and if him, Pirlo and Lampard get touched they go down, they draw fouls, they draw yellow cards and it’s an epidemic across the league of these referees who just want to give the benefit of the doubt to star players."

But, as fate would have it, the undignified griping didn’t stop there. He sniveled about a conspiracy of referees against his players. "When you go back and watch the [Philadelphia] game, from the start of the second half," Marsch sniffled, "the referee just decided that he wanted to give the Union a little bit of an edge on every little play. It’s a trend that we’ve seen with referees."

Cuz, if there’s one thing that gets MLS Referees up in the morning, it’s picking on the Red Bulls.

Then, moments later, Marsch did the unthinkable. The master truly out-did himself with what can only be described as whining par excellence:

"The frustration that we have on the referees and the way that we feel that we just don’t ever get the benefit of the doubt, one penalty call all year. That frustration continues to mount.

"I’m just waiting for the referees association, I’m waiting for referees, I’m waiting for anyone to recognize the fact that we’re an honest team that plays in an honest way and gets punished for calls, for plays, for penalties, the whole bit across the board and we never get rewarded."

Wow. The whimpering was so loud that you could almost hear it in the state of New York.

I mean, at this point all you can do is sit back and breathe it all in. You are witnessing a true virtuoso of whine in his prime. We are lucky to be the ones alive to witness it live in person. We can even throw it in our grandkids’ faces like, "You little whippersnappers can whine all ya want! In my day, I had to sit through years of press conferences listening to Jesse Marsch!"

Perhaps most impressively of all, though, is how Jesse Marsch’s aptitude developed to the point that he doesn’t even need to verbalize to whine. He has turned it into hissy fit performance art in Chester, PA while the Red Bulls got knocked out of the US Open Cup like they literally always have in their 20 year history:

Marsch is ejected but on the way out he grabs a few balls and throws them in anger. pic.twitter.com/x9ilOEAl7F

The man literally tried to take his balls and go home. It's amazing-- all of this epic crankiness has happened in 2016, and it’s only July.

The people have spoken, and the poll numbers don’t lie. I crunched those figures over and over again, and I keep getting the same result. Jesse Marsch is a good coach, but he’s far more accomplished as a whiner. Bitching and moaning is what Jesse Marsch was put on this Earth to do.

So, enjoy watching one of the greats doing what he does best while we still have him around, folks. We're witnessing something very special here.